I have a running joke about my husband Bryan. I don’t ask him what he thought of a movie until about a week after we see it. That way I can get a proper answer. You see, movies are like hand grenades for him: they only explode after time has elapsed. The more he thinks about a movie, the more likely he is to hate it. I think the world record for fastest turnaround with him was Star Trek: Generations, where after the lights came up, he was gushing about how great the movie was. When we were out in the hall he was like “wait a minute.” And by the time we started the car he was saying “WTF was that piece of shit!?”

My opinions about Love, Simon by comparison have gone full circle. I hated the idea of it, then I loved it, now I can acknowledge that it does, in fact, suck. 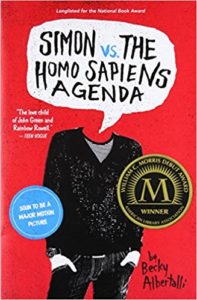 I loved the book the movie is allegedly based upon, Simon vs. the Homo Sapiens Agenda, so I was cautious going in. (Much the same way I am dreading seeing Ready, Player One in the theaters, knowing that no matter how good the film is it will never live up to my imagination.) I was especially concerned because all the trailers and advertising were making it out to be an epic love story, which the novel is not. In the novel, the romance is really the “B” or “C plot, just the catalyst for the main storylines. I won’t give away any more for those of you who have not read the book. No spoilers here if I can help it.

Seeing the movie, and the fact that they at least made the book’s “A” plot the “B” plot, I felt better. I was especially entranced by Nick Robinson, who I had earlier fallen in crush with watching The Kings of Summer and how he realistically portrayed Simon Spier. So I felt good leaving the theater.

Now, with distance between me and the screen, I can look at the movie with clear eyes and acknowledge it for the shitstorm is actually is. 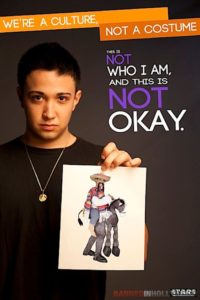 Probably the one time each year that the average American thinks (if they do at all) about “cultural appropriation” is around Halloween when the backlash against racist, sexist, and other -ist costumes once again makes itself known. It’s when people who are not part of a culture dress themselves (figuratively or literally) in a stereotype of that culture for amusement’s sake. For a more recent example, consider how the 12.5% of me that is of the O’Donnell Clan feels when they hear “everyone is Irish on St. Patrick’s Day.” Hint: it feels worse than the Polish part of my ethnic heritage, which is always afraid that the German part of my heritage is going to invade it again.

Cultural appropriation is wrong. I acknowledge that. The use of “Indian” stereotypes like Chief Wahoo are subversively racist and have no place in today’s culture. And while my alma mater’s team will still always be the Brown Indians I agree that the school was right to change it.

Let’s start with, sadly, the book. Simon vs. the Homo Sapiens Agenda is a coming of age, coming (or being forced) out story about a young gay man written by… Becky Albertalli.

That’s right. This story about a gay boy was written by a straight woman.

In and of itself, this is not a big problem. It’s just a symptom of a larger problem. After all, about 90% of all books about gay teens that are on bookshelves are written by women. Another 4% are written or co-written by John Green. That leaves 6% or so of books about gay teens that are actually written by gay men. And 5.8% of those are by David Levithan. In the competitive world of retail bookselling there isn’t much room on the shelves for people like Bill Konigsburg or Mark A. Roeder and nearly no room at all for up and coming authors. Booksellers have to go with what they know will sell and to them YA is written by women for women.

Now let’s go on to Nick Robinson. Nick is straight. Openly straight. Almost flamingly straight. When there are so many young out actors, or those who are on the verge of coming out, the protagonist of what is being billed as the first great teen gay romance is being played by the straightest of straight boys. I don’t know whose decision it was, whether the studio forced the straight boy onto the project or if Greg Berlanti, the openly gay director and creative force behind the film, made the choice himself. But it’s not encouraging to see that gay leading roles still have to be played by straight men who are “brave” for making the choice to play against their orientation. (This is nothing new; I’ve been bitching about this for 20 years ever since straight Eric McCormack beat out gay John Barrowman for the part of the gay leading man on Will and Grace.)

“But there are actual gay boys in the movie,” you’re saying. Yes. There are three. Oh, what the hell.

One of them is Joey Pollari, who plays a straight waiter named Lyle. Another is Keiynan Lonsdale, who plays Bram, who in a fake-out the novel did not need, we are led to believe is straight the entire freaking film. And before you ask, the kid who plays Cal the pianist (who has a much larger part in the book and is acknowledged as gay therein) isn’t number three; Miles Meizer is straight.

Clark Moore plays Ethan, who is the movie’s homophobic comic relief. He swishes and sways, wears his hair long, and is played like someone plucked off the runway of RuPaul’s Drag Race (“Category is: realness!”) and dropped in a high school. He is played as every bad mincing stereotype for maximum comedy, and no main character (not even newly outed Simon) treats him nicely or even as a human being. The script and direction surely don’t. He’s there to make straight people laugh at him, a Stepin Faggot character of the worst kind.

There is literally no reason to have Ethan in the movie. Other characters with more actual impact (like Simon’s older sister) who were in the book were cut out of the film, so why keep Ethan who has no impact at all on the plot?

Just to show everything “gay” that Simon is not.

Ethan is there to show what people expect gays to be: effeminate, swishy, just south of cross dressing. Simon is none of those, so Simon is the acceptable gay. Especially because he’s played by a straight boy.

Clark Moore and Nick Robinson are very talented actors who deserved better than to be stuck in these sad stereotypes of femme and butch queer kids.

The film loves to ask “why is straight the default” so much that they sell freakin’ T-shirts with that slogan. Here’s the answer: it’s the default because Hollywood insists on casting straight actors for gay roles.

But that’s okay, because we queers aren’t the film’s target audience. Straight girls are. 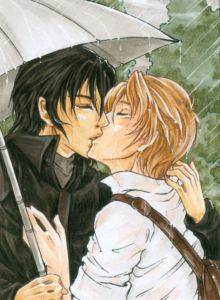 For those of you who have not been around manga-obsessed teen girls in recent years, “YAOI” is a form of manga about boys in love with each other. The term comes from a Japanese acronym for “no climax, no plot, no meaning.” It’s just slightly androgynous boys getting it on with each other to make straight teenager girls aroused. It’s written by women for girls and the men are just objects of the audience’s lust.

Written by women (novel – which is not YAOI but has a compelling plot – by Becky Albertalli, screenplay co-written by Elizabeth Berger) for teen girls.

Simon is portrayed throughout the film as ideal boyfriend material, played by a masculine actor who is not unpleasant to look at, to provide a sex symbol for teen girls to desire. And when he kisses another hot boy at the end? Boom.

For Hollywood, this is not a bad thing. Teen girls first showed their power by keeping Titanic afloat for so long, seeing the film and its love story multiple times.

(For the record, I almost linked to the theory that Jack from Titanic is actually a cross-dressing woman here, but when I went googling for a link I got scared; never search for “Titanic Transsexual” if you know what’s good for you.)

But I digress. Teen girls in cinema.

According to MPAA numbers for 2014 (most recent I could find online), more women than men buy movie tickets, and 40% of all tickets are bought by people 24 and under. So if you can win over a big bunch of teenage girls and get them to see your movie multiple times it’s a formula for success.

Yes, it’s nice that gay teens have representation on the screen. It’s nice that a gay teen love story did so well. And it’s wonderful that it’s inspiring gay teens to come out to their parents.

But kids? Make no mistake. You are the side effect. This is not your movie. You were not the intended audience. And this is not going to blaze a trail for real gay cinema. This is just another teen girl-targeted romance. This is this year’s Everything, Everything or The Fault in our Stars as far as Hollywood is concerned.

Is it worth seeing? I guess. I don’t regret seeing it. I may watch it again when it comes to Netflix. But so much about this movie leaves a bad taste in my mouth. (No gay pun intended.) It reinforces the “acceptable gay” trope. It continues the tradition that only straight boys can play leading roles (or, even, gay roles!). And it’s appropriation by straight women of gay youth culture and stories by straight women to appeal to straight teen girls.

All of which I would have thought Hollywood would be long past by now.