As happens regularly, people are talking about getting rid of the one cent coin (“penny”), saying that it costs too much to produce and has too little value.

Some say that without the one cent coin we would just round every transaction to the nearest five cent mark, but that’s wishful thinking. Every example of where the lowest denomination coin has been eliminated has shown immediate price inflation. Plus, since Americans have been trained to think of their coins not as multiples of cents but fractions of a dollar, the dime will immediately become the lowest effective denomination to many people with the five-cent nickel relegated to the status of half a dime (which was actually what the five cent coin was called from 1792 until 1873).

And when you consider the fact that the US loses more per coin minting the nickel than it ever did on the cent, very soon there will be a push to eliminate the nickel. This will make the dime the de jure, not just de facto lowest denomination.

The answer is not to just stop minting cents and nickels, but to make them cost effective. And the best way to do that is to do what the US did in 1857, 1864, 1873, and 1965: revamp our coinage system almost completely.

The last Half Dime minted in 1873 was 15.9 millimeters in diameter, significantly smaller than the dime. I propose that we make the new half dime the same dimensions as the 1873 model, and make it of the same clad composition as the dime, quarter, and half dollar. To make it easy to tell from other coins in your pocket, I suggest we use what is called an “interrupted edge,” where the edge alternates segments of reeding (the vertical “bumps” on the side of the dime, quarter, and half) and smooth edges.

Since the weight of the new coin would once again be about half of that of the dime, it will remain economical to mint this coin as long as it is economical to keep the same composition for the dime and quarter.

Next, we need to take a lesson from the Eurozone, and make our one cent coin smaller. The Eurocent is currently 16.5 mm in diameter, compared to the current U.S. Cent at 19.05 mm. I suggest actually going slightly smaller to avoid a clash with the Half Dime and the third leg of my reform stool, which I will mention below. I propose a Cent of 15 mm exactly.

The new Cent will look similar to the current cent, since it will keep its copper coating. However, the inner core will no longer be zinc, but steel as is used by the Eurozone, Britain, and Canada. Between the smaller size and the cheaper (and sturdier) material, the coin will be less expensive to produce and last longer.

To ease the transition, I recommend using the current designs (Lincoln/Shield for the Cent and Jefferson/Monticello for the Half Dime). This way, people will have some continuity between the old coins and the new, to help them get used to them.

As old coins arrive back at the Federal Reserve, they can be retired and melted for their constituent metals, to be made into new coins. Since the current Cent and Nickel have more intrinsic value than their face value, this will actually mean a net profit to the government. Both old coins, however, will still remain legal tender and can be spent for years to come.

These two changes are not the end-all, be-all of the change, however. There is still one way to cut down on the number of Cents that are needed each year without suffering the economic consequences of eliminating the denomination altogether. We simply lessen the demand the same way we did during the Civil War.

The U.S. had a Two Cent coin from 1864-1873, which was designed to take up some of the demand for Cents, which had been driven out of circulation by hoarders during the Civil War (back when they were made of nickel, which was a semi-precious metal at the time). I say we not only keep the “penny,” but give it its proper sibling again, as have the British and the Eurozone: the “tuppence.” 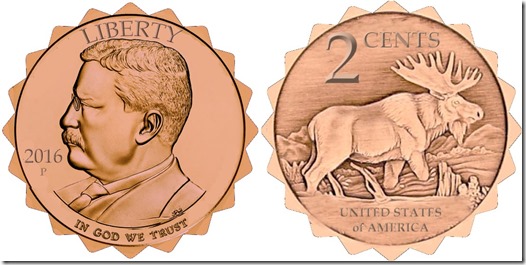 Since the main use of the Cent nowadays is in making change, adding a Two Cent coin into the mix makes this process easier and cuts down on the number of Cents needed. The Two Cent coin can be minted for only slightly more than the new Cent will be, and would have twice the value, so only half as many would be needed. Where three or four coins are needed today, only two would be needed with this new addition. Instead of three pennies, hand back a tuppence and a penny. Instead of four pennies, hand back two tuppences. And, of course, hand back one tuppence instead of two pennies.

I propose that the Two Cent coin be revived at a diameter of 18.8 mm, slightly larger than the current dime. To distinguish it from the new Cent, Half Dime, Dime, and current Cent and Nickel, it will have a scalloped edge as can be seen above. This edge will make the coin easily distinguishable both visually and by feel. You will know you have a tuppence in your pocket, and can easily distinguish between the four small coins either by looking at them or touching them. And even with this distinctive edge, the new coins will still be able to stack and roll in vending machines, coin counters, or automatic change dispensers.

The tuppence will be the same composition as the new penny, and will change along with it should a cheaper material ever be required.

For a distinctive design, I chose someone woefully neglected on American money: Theodore Roosevelt. Roosevelt singlehandedly started the design revolution in American coinage that gave us the St. Gaudens gold coins, the Lincoln Cent, and eventually the Buffalo Nickel. Since the Mint recently released a Theodore Roosevelt coin in the Presidential Dollars series, there is an engraving handy that can be adapted easily to become the obverse of the new Two Cent coin.

For the reverse, I chose an animal linked forever with Teddy Roosevelt: the Bull Moose with whom he compared himself when launching his 1912 campaign for the Presidency. It will also be reminiscent of the much beloved Buffalo Nickel, and a chance to pay homage once again to conservation and American wildlife on our coins.

The graphic below shows the relative sizes of the three new coins, alongside the current Dime and Quarter Dollar, so you can see the system I propose at work.

With these changes, the American coinage will not only be cheaper to produce, but will once again be logical. The smallest denomination will be the smallest coin. The Five Cent piece will be smaller than the Ten Cent piece again. And the new Two Cent piece will fill a need better than an ever increasing number of One Cent pieces ever could. And all without the inflationary affects of doing away with our smallest coin.