How to Plot a Novel, part 1

As I start the heavy lifting on Crush Story, I thought it might be a good time to discuss one of the ways I like to develop the plot of a novel.

There is no “right way” to plot a novel. There are a couple of wrong ways, but even they can yield positive results sometimes. It isn’t even necessary to actually plot a novel, as was the case when I wrote Sidekick. I knew where the story began, I knew where and how it would end, but I left almost everything in the middle up to chance. Yeah, I had a couple of scenes I knew I wanted to include, but how I got to them, and from them to the end, I didn’t know until I actually started writing.

Some stories, however, can’t be done by the seat of your pants. They get intricate and complicated, and you might either leave something out or get your story so tied up in knots that you’d do better to just start over. I expect Crush Story to be that kind of story, so I am going to actually plot it. 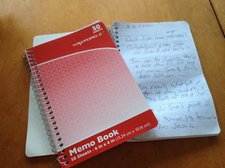 There are a couple of things you will need while you are plotting.

The first thing is a good thing to have handy even if you’re going to try and wing it. You will need notebooks. I used the plural there for a reason. Keep a stock on hand just in case you mislay one of your notebooks, as I have been known to do on too many occasions. Also, carrying them around in your pocket will all but destroy the notebooks pretty quickly, and you’ll have to move on to the next before too long. My local Walgreens recently had a sale on pocket-size “memo books” selling them three for a dollar so I snatched up several. Keep an eye out for bargains like that and never let yourself run out.

Once you have notebooks, make sure you carry one around with you at all times. And a pen or pencil, too. You literally never know when you will have inspiration strike. I was actually riding on a train a while back when an idea hit me that would wind up changing the entire “third act” of the book. (More on that later.) If I hadn’t had my notebook I probably would have forgotten it a couple hours later when I got home. Never be without your notebook!

Second, you will want index cards. Index cards are wonderfully useful items that let you rearrange major plot developments in no time at all. As you can see in this picture, I’m using two different colors of index card because Crush Story is going to be narrated by two separate POV characters who pretty much alternate chapters. This way I can see which plot points belong in which character’s chapters, and I won’t need to jump back and forth between POV’s more often than I want.

Once you have your index cards, use them. Copy important scenes you scribbled in your notebooks onto them. If you already have more than just an idea or description for a scene you want, add “bullet point” notes on the rest of the card for lines, gags, important things to remember, and so on. Feel free to use both sides of the card.

The other thing you will need, or at least I need, is caffeine. When I do writing marathons (as I tend to do once inspiration has hit me) I need my Pepsi Throwback to keep me awake until the muse stops hitting me over the head.

With notebooks and index cards on hand, you’re ready to start on the plot. You’re going to want some structure, which I will discuss in an upcoming entry.