How to build a real life superhero costume on the cheap

Writing superhero fiction is a tricky thing. The tech possessed by heroes tends to need to be more fantastic than what we have in real life, simply for convenience in storytelling. After all, why worry about realism in a world where people can fly and shoot laser beams out of their eyes?

But you also have to keep things somewhat grounded in reality. The suspension of disbelief only goes so far, and eventually you can reach a point where a reader’s mind calls bullshit on you. I push that limit a lot with Bobby’s gear in the Sidekick series and have been called on it. Readers will accept anti-grav boots, but bulletproof boxer shorts? Get real.

The idea of a costume to conceal a crime fighter’s identity dates back to 1936 when Lee Falk created the Phantom, arguably the first modern “masked man” vigilante. When Jerry Siegel and Joe Shuster invented the modern superhero with Superman in the 1938, they dressed him in a sideshow strongman’s outfit to stress his strength and added a cape to allow fluidity of movement in their art. Then with Bill Finger’s designs for Batman in 1939, the idea of a functional themed costume became reality. These costumes served their purposes and set the standards for creators like me to this day.

So I was thinking recently, what if I wanted to create a superhero outfit today? Something that would make it easier for a person, should he or she be so inclined, to go out and fight crime in their spare time. Granted, intense training would be required and a budding superhero would be most effective in peak physical condition, but there would still be weaknesses that the costume would need to help.

DISCLAIMER. This post is for entertainment purposes only. I am not suggesting anyone out there actually try being a superhero. It’s dangerous. Do not sue me if you do something stupid.

Most superheroes wear masks, thanks to Lee Falk, but a mask alone is not sufficient protection today. We don’t have comic book tech to help us, so we need real life possibilities.

Let’s start with a helmet. The Premier Crown JCR100 Riot Duty Helmet offers a lot of neat features and will withstand some pretty nasty blows. It also offers enough room for some of the features we will be adding to it.

Instead of a mask, why not go with something functional as well as disguise worthy? I chose the ESS Profile NVG Military Goggles from Safety Glasses USA. Good eye protection, and the tinted lenses will also keep your eyes from being recognized. Eventually, however, you might want to replace these with the new Israeli Lightweight Night Vision Goggles when they become available. Until then, if you need night vision, try the Armasight Dark Strider Gen 1+ Night Vision Binocular (pictured), which seem to be the least bulky option. 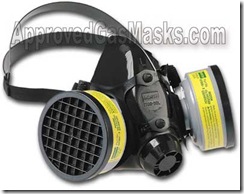 You’ll also need something over your lower face. The North 7700 Half Mask will hide your nose and mouth, provide some protection against pepper spray and tear gas, and also help distort your voice if you need to speak. Remember, the bad guys you will be up against will not have any delusions of being honorable and obeying laws against certain anti-personnel weapons, so get the most protection you can.

Finally, there is room under the helmet for earphones, so try something like Kinivo BTH220 Bluetooth Stereo Headphones linked to a cellphone stashed safely away so you can stay in constant communication. And since you won’t want to call the cops with your real number, go with the Burner app!

Why does Batman have a big yellow target on his chest? Because that’s where he’s the most protected. Yeah, the super-cool lycra suits artists like to draw might look good, but unless you are nigh invulnerable, they’re worthless. Body armor is the way to go.

The best bet is to get everything you need in one handy kit: the M2100 Disturbance Control Kit. It provides you with a vest, shin pads, forearm guards, and groin protection with a nifty carrying bag. Its vest isn’t bulletproof, however, so you’ll want a ProMAX Concealable bulletproof vest to go underneath everything. And when it’s warm outside, you may want to add a personal cooling system to your gear.

I’m going to assume speed is of the essence, instead of some specialized need like climbing, so I selected the Timberland PRO Mudsill Low Steel Toe from Zappos. Steel toed protection, lightweight, and traction. Good running shoes for when you’re chasing down the bad guy.

You will need some kind of weapon when facing down a supervillain. The one I decided upon doesn’t come stock, and will need some gadgeteering on your part to work perfectly.

Start with a Taser. You’ll probably want two: one with cartridges that you can stash in your utility belt (see below) and one that you are going to jury-rig into your glove to deliver a trademark Knock-Out Punch!

Wire the leads into the glove that you will wear on your dominant (punching) hand. Wire one lead to a steel band lined with a ceramic center worn over your index finger like a ring, and the other to an identical band around your little finger. This way it’s unlikely the two electrodes will come into contact accidentally, and the ceramics will provide extra insulation to protect you.

Speaking of which, you’ll want some disposable zip-tie handcuffs to secure your villain while he waits for the police to arrive. Always keep a few on you.

Add in the usual necessaries like a flashlight, first aid kit, and an energy bar or two all held close to you by a freakin’ Ninja Utility Belt!

Over top of all this, you’ll want the actual costume. Sure, you can be gaudy and decorative, but if you’re more into function than style, you can’t beat some flame-retardant coveralls. If you must, add on a cape, too

So how much will all this cost? Not as much as you might think! I’ve been keeping a running total, and everything in this entry can be purchased today for under $2,500.00. That’s allowing you $200.00 for the outer costume and cape. If you want to pick up a prepaid burner cell phone that you can swap SIMs in, add on an extra $30 to $700 depending on how nifty you want it to be. I suggest cheap because going into battle with the baddies will tend to take its toll on electronics.

Again, I don’t recommend going out and fighting crime on your own. But from a writer’s standpoint, it is nice to know it’s possible, and not just for a millionaire playboy!